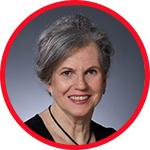 902.892.4605 • This email address is being protected from spambots. You need JavaScript enabled to view it.

Dr. Frances Gray, pianist, was awarded the title of Professor Emerita upon retirement from forty-five years of full-time teaching at the University of Prince Edward Island at the 2014 Convocation. She taught in the areas of Piano Performance, Piano Literature & Pedagogy, Collaborative Piano, and Music Theory. She received her Associate Diploma and Bachelor of Music Degree from McGill University, studying piano with Professor Dorothy Morton, and her Master and Doctor of Music Degrees from Indiana University, where she was a student of Menahem Pressler, renowned teacher and pianist of the Beaux Arts Trio. She has received many awards and research grants, including the Silver Medal upon graduation from McGill University, Canada Council Fellowships, and a Commonwealth Scholarship for a year's study at the Royal Academy of Music in London, England. In 1998, she received the UPEI award for Outstanding Scholarly Achievement.

Dr. Gray has concertized extensively as chamber musician as well as soloist, and has been heard on regional and national CBC and Radio-Canada broadcasts. Her principal love has been to make music with others and she has collaborated with many soloists and chamber groups, performing throughout Canada, in the United States, at Canada House in London, England, at the Canadian Embassy in Brussels, Belgium, in Rachmaninoff Hall of the Moscow Conservatory in Russia, and in Melbourne, Australia. One milestone is to have performed all of the Brahms chamber works with piano. Her three solo piano CDs recorded at the studios of the Banff Centre for the Arts--Poems for Piano, The Evocative Piano, and Soundscapes of Spain--all won nominations for an ECMA classical award. Dr. Gray has performed several times with orchestra, including performances of the Mozart K.491 Piano Concerto, the Liszt Concerto No. 1, the Saint-Saëns "Carnival of the Animals" and both Gershwin's "Rhapsody in Blue" and the Piano Concerto in F. She also performed the first movements of the Chopin Concerto No. 1 and the Mendelssohn Concerto Op. 25. She was for many years the regular pianist and keyboardist with the Prince Edward Island Symphony Orchestra. She was a long-time performer in concert at the Indian River Festival and in the mid-1980's she organized and performed in four years of chamber music programs called Mid-Summer Night Concerts which featured guest artists from Canada and the United States.

Dr. Gray maintains a number of pupils in her home studio and is active in the musical community. Her students have consistently won top prizes in music festivals and a good number have represented PEI at the National Music Festival. She is a founding member and served for many years as the Registrar of the Prince Edward Island Registered Music Teachers' Association.